FastMail has hinted its customers that it’s going to halt Bitcoin (BTC) payment starting from March 2019 over what the email service provider calls maintenance cost.

In a message to its customers as made available on Reddit, FastMail, a competitor to Gmail, said it is parting ways with Bitcoin payments starting from March end due to the fact that just a small number of its customers uses cryptocurrency as a payment option on the platform.

This, according to FastMail, makes the integration costs of maintaining Bitcoin support unsustainable.

The Message Reads in part: “We’re parting ways with Bitcoin payments at the end of March.”

“Bitcoin is used by only a small number of customers, which unfortunately makes the integration costs of maintaining Bitcoin support unsustainable. You can still pay with Bitcoin through March 31st, 2019. Add funds to your account now to be used for future renewals.”

“We offer four other payment method (Visa, MasterCard, American Express and PayPal) that you can use to pay for your account after March 31.” 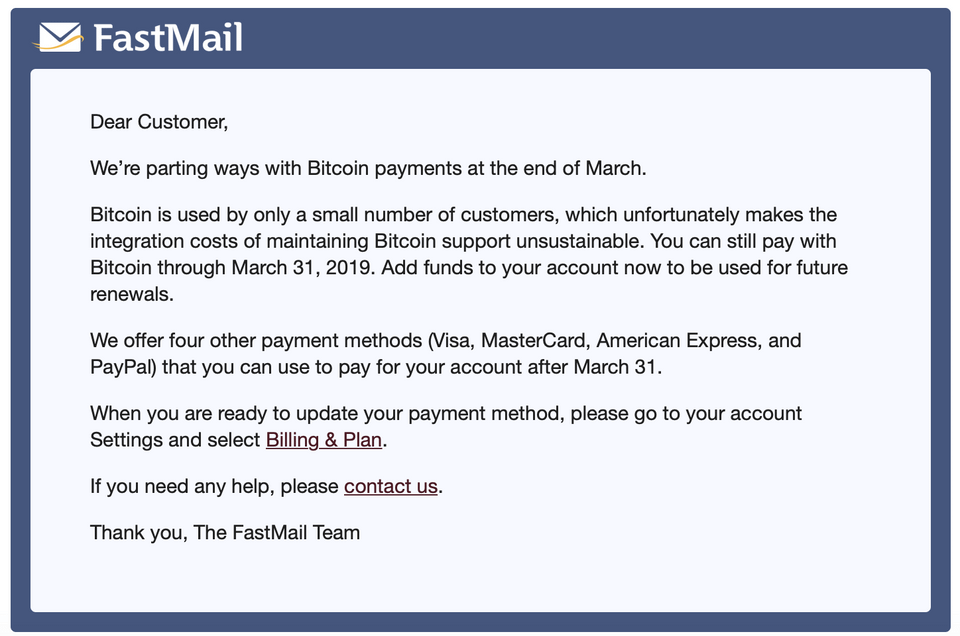 Read: Global Bitcoin Acceptance Has Grown By 700% In 5 Years

According to available findings, FastMail is the only email service provider accepting cryptocurrency out of the many that we have today. FastMail was launched 20 years ago, it at present services more than 100,000 individuals and businesses internationally.

For all of ya gloating about the #Bitcoin price, it's only got to this point because some of us actually used it to buy things in the real world in the past. Here's my $850 pizza, $160 bondage tape & $1688 Fastmail subscription from a while ago. Show me your receipts, speculators pic.twitter.com/q0ntU5hR0I

While FastMail did not first make the announcement that it has adopted Bitcoin, crypto enthusiasts confirmed that it did through the payment option available on the platform.

To date, FastMail remains reliable, and outstanding among its fellow service provider nationwide. Crypto enthusiasts have since been condemning the sudden decision of the firm, saying Bitcoin is in its early stage of adoption.

Our authors have investments in cryptocurrencies. However, NewsLogical does not endorse any cryptocurrency project referenced in any of our article. Kindly read our editorial policy. In this wise, do not use any information presented here as investment advice.

Do your personal research before making any investment in cryptocurrency, the market is generally volatile.

The United States Commodity Futures Trading Commission (CFTC) has recently reported that one Benjamin Reynolds, who was reported to have...

XRP is 57000x Sustainable for our Planet than Bitcoin – Ripple CTO

Weiss Analyst: BTC Investors Should Look For Weakness As Entry Points And Hold On Tight

Although BTC did not demonstrate the long-awaited growth after halving, Weiss Crypto Ratings specialists are confident that...

Weiss Analyst: BTC Investors Should Look For Weakness As Entry Points And Hold On Tight

Although BTC did not demonstrate the long-awaited growth after halving, Weiss Crypto Ratings specialists are confident that the prospects for...

Find out more or adjust your settings.

This website uses cookies so that we can provide you with the best user experience possible. Cookie information is stored in your browser and performs functions such as recognising you when you return to our website and helping our team to understand which sections of the website you find most interesting and useful.

Strictly Necessary Cookie should be enabled at all times so that we can save your preferences for cookie settings.

If you disable this cookie, we will not be able to save your preferences. This means that every time you visit this website you will need to enable or disable cookies again.